From the time of Adam and Eve the world was waiting, waiting for a Savior. In the first century in Palestine, the world seemed poised with expectation. All signs pointed to the time of a Messiah, but where, when and how could this happen?

For Mary and Joseph, a long and dangerous journey is finally over.  They can see their destination, Bethlehem, the birthplace of King David.

But now another problem. The child is coming! And the town is crowded with no private space available anywhere.

Finally an offer of shelter, a stable for the animals.  The Virgin is with child. And now is the time! The King is here.

The manger at Our Lady of the Lake Catholic Church

The celebration of the birth of Jesus is one of the most joyous seasons of our year. The Christmas season begins on Christmas Eve and concludes with the Feast of the Baptism of the Lord, usually on the Sunday after the Epiphany. The color white used in vestments and other altar items at Christmas is a symbol of joy, purity and eternal life.

Creche is French for “manger” and refers to the nativity scenes popular for centuries in Christian churches and households.

St Francis of Assisi is credited with creating the first nativity scene in 1223 at Greccio, central Italy, in an attempt to place the emphasis of Christmas upon the worship of Christ rather than upon secular materialism and gift giving. The nativity scene created by Francis was staged in a cave near Greccio.

Saint Francis' nativity scene was a living one with humans and animals cast in the Biblical roles. Pope Honorius III gave his blessing to the exhibit.

Behold, the virgin shall be with child and bear a son, and they shall name him Emmanuel, which means “God is with us.”

On Christmas Eve, our Advent journey brings us into the Christmas season.  The most precious gift of Christmas came in a small bundle wrapped without a bow. Because of Jesus…

A Crisis Pregnancy and A Choice for Life

A young teenage girl pregnant out of wedlock in a culture where the penalty for that was death. An engaged man discovered his betrothed was pregnant but the child was… 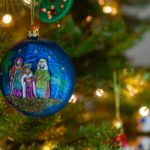 Advent Tree Gifts were picked up and delivered December 9! Our Lady of the Lake Parish would like to thank parishioners for their outstanding support! Special thanks go out to…